On Saturday, our senior group had it’s first practice match of the season against St Kevins Old Boys football club from the VAFA. It was our first opportunity to have a run on our home ground since the new turf has been laid. The conditions were ideal for football, which meant the game was played at a fast pace.

Both teams were able to test out their new game plans and set ups and that gave the coaches from both teams a good look at where the clubs are at. There were some really positive signs for the Seagulls with recruits; Aaron Walters, Ned Aulsebrook, Sam Evans and Darcy Williamson showing the benefits of a strong pre-season. Senior regulars in Luke Michell, Tim White, Jason Kerby and Braden Eddy also played great games.

Below are a couple of photos from what was a great start to the season. Included in the photos are our Senior Coaches Mitch Herbison and Bobby Wallace, with St. Kevin’s Senior Coach Shannon Grant and a couple of the St. Kevin’s players (ex-AFL) Stephan Gilham and Mitch Brown. The feedback from the St.Kevin’s crew was that they really enjoyed the couple of days in Barwon Heads and were very appreciative of BHFNC for the chance to come down. 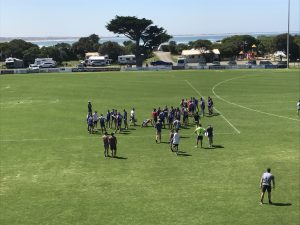 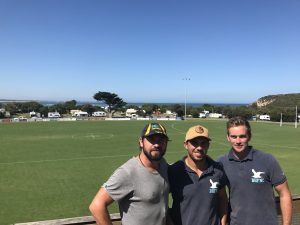 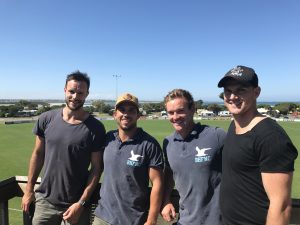