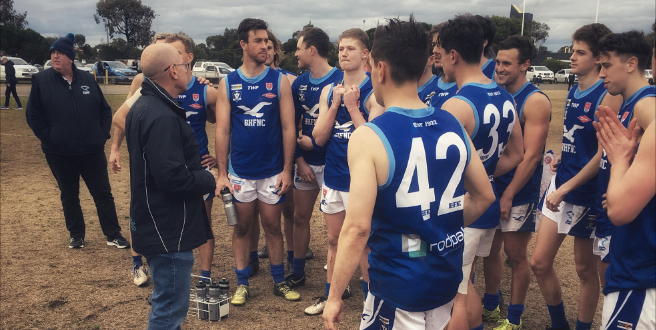 Barwon Heads continued their winning run and recorded its sixth consecutive victory with a 72 point victory away to Newcomb. Barwon Heads made 5 changes to the side that defeated Drysdale in emphatic fashion last week – out of the side went Braeden Eddy and Brock Close who were unavailable, Sam Evans injured, Nick Avery suspended and Jaydan McLauchlan was rested. Into the side came two first gamers – youngster Oliver Wiltshire from our Under 17 team, Darcy Hewitt promoted from the reserves and Brad Michell, Dylan O’Leary and Harrison Mitchell were recalled.

Newcomb had first use of the breeze and for the first 10 minutes had all the play and with repeat forward 50 entries threatened to establish early supremacy. Barwon Heads certainly looked lethargic and weren’t displaying their usual tenacity around the ball. Newcomb peppered the goals but inaccuracy let them down. Finally Barwon Heads clicked into gear with co coach Mitch Herbison kicking multiple goals and Brad Harvey also kicked his first. Then Harrison Mitchell snapped an opportunistic goal from congestion and the Heads had opened up a two goal lead. Ben Stephens was an early casualty but lion hearted Matty Dyer was great in the ruck and he was combining with Ned Aulsebrook, Otto Opperman and Ryan Harvey to gain midfield ascendancy.

Barwon Heads had the breeze in the second quarter and were keen to establish a match winning lead and they created plenty of chances for our forwards which resulted in an 8 goal blitz through Brad Harvey (3), BJ, Otto, Mitch Phelps, Ryan Harvey and Herbi. Up back our frugal defence led by Kizza, Socks, Zac Walter, Matty B, Darcy Hewitt and Philpy kept Newcomb scoreless. Noah Young, James Wills and Dylan O’Leary were busy players and Strawbs was again having a major impact up forward and around the ground as the Seagulls went to the major break with a 10 goal lead.

The third quarter saw Newcomb lift their intensity and were rewarded with their most productive quarter with 5 goals whilst the Heads also kept the scoreboard ticking over with 6 goals through Phelpsy, Herbi, BJ, Brad Harvey, Harrison and first gamer Oliver Wiltshire who was swamped by excited team mates.

The final quarter saw both sides trade goals with Marto clunking some strong marks up forward to kick two goals whilst Strawbs kicked his first for the game. The game petered out as the Heads ran out 12 goal victors to remain second on the ladder. Dogga was great all day and our leaders in Herbi and Strawbs led from the front all day.

Barwon Heads reserves fielded a side weakened by injury, unavailability and promotions to the seniors but were able to tough out a gritty 39 point victory over the improving Newcomb. It was great to see Mac Kirsopp recalled after strong training and the “excitement machine” continued his great form and up back Lloyd McIntyre, Menace and Billy Pelham led a stingy defence. TP bagged 4 goals and Xavier Everett used his experience and pace to great effect and a Yappa was consistent all day.

Next week Barwon Heads travel to Anglesea in a crucial Round 16 game which will have a major impact on the top 5 as 6 clubs are separated by only 6 points on the ladder.