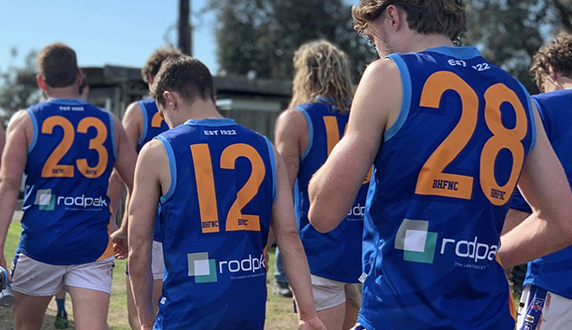 Barwon Heads produced a clinical performance against Geelong Amateurs in the second semi final at Portarlington to win by 89 points and to qualify to play in the Bellarine Football League Grand Final to be played on Saturday 14th September at Torquay.

Barwon Heads who sat outside the top 5 at the half way period of the season have now won 10 of our last 11 games to qualify for consecutive Grand Final appearances. Barwon Heads played in its first Grand Final for 25 years when we played Modewarre in 2018.

The Heads made two changes from its Qualifying Final win over Torquay with the inclusion of young guns Charlie Sprague and Charlie Brauer whilst both Lachlan Slorach and Max Melzer missed with injury.

In bright sunny conditions the Heads kicked the opening goal through Mitch Phelps before the Ammos replied from Brydon Barnett. Onballers Logan Mitchell, Xavier Everett, Ned Aulsebrook and Mitch Herbison were lively early whilst up back Damien Horbury, Sam Evans and Kyle Polley were defending with great intensity. Heads were winning plenty of possession even though Ammos had a slight breeze at their back. Barwon Heads had momentum through Charlie Brauer, Jaydan McLauchlan, Ben Stephen  and Matt Dyer and this was rewarded with goals by Mitch Herbison and Tim Chapman to establish a 14 point lead at the first break.

Barwon Heads now had use of the breeze and quickly added goals through Phelpsy and Charlie Brauer to establish a 27 point lead. Brock Close, Braeden Eddy, Otto Opperman and Zac Walter were prominent but the Ammos responded with 3 consecutive goals through Harry Kershaw, Patrick Killen and Mason Spikers to reduce the lead to only 8 points. The game was now up for grabs and the Heads responded with goals by Chris Martin, Herbi and vice captain Ned Aulsebrook to lead by 26 points at the long break.

The third quarter started with a Mitch Day out bustling Matty Dyer in a ruck contest to snap a goal to reduce the lead to 20 points in the opening minute. Barwon Heads responded with a great snap goal by Brock Close before an arm wrestle for 15 minutes ensued with the Heads showing great grit and toughness to nullify the Ammos. Ryan Harvey and Charlie Sprague were influential on ball and Michael Philp, Strawbs, Kizza and Zac continued to defend with intensity and provide rebound. Co coach Herbi exploded with 3 consecutive goals and Phelpsy kicked two majors and then J-Mac and Brock also goalled as the Heads opened a 69 point lead with a great 8 goal to 1 quarter.

The last quarter kicked off with Mitch Day kicking his second before Luke Michell snapped a great goal. Ammos were not going to lie down and they kicked goals through Jarrod Young, Will Kelly and Mitch Day which was his third. Barwon Heads continued to hit the scoreboard and Phelpsy kicked another 3 to bring his personal bag to 7 goals whilst Sachin, Brock and Charlie B all kicked majors as the Heads recorded a 89 point victory.

RESERVES LOSE A CLOSE ONE

Barwon Heads have failed to overcome top side Torquay in a thrilling second semi final to lose by 9 points in a great game. All game it

was tough and uncompromising in a low scoring game but even though the Heads boys were gallant, poor execution and a lack of direct play was the eventual down fall. Barwon Heads will have to win next week’s Preliminary Final to get another crack at Torquay in the Grand Final. The Heads had good players with Mitch Gaunt on ball and up forward whilst Harry Walker was an inspiration with his unflinching attack on the ball. Billy Pelham was rock solid up back with Lloyd McIntyre and the returning Mick Salmon was super whilst Brad Michell was terrific all day.