Former junior BHFC star Ned McHenry has been selected by Adelaide to make his AFL debut this Saturday night against Port Adelaide in the showdown.

Ned was a sublimely talented junior player who’s work rate and skill always made him an extremely dangerous player. A credit to Ned, who was always super effective with ball in hand worked tirelessly at his defensive game to help put his name up in lights for recruiters. A sensational year in the Geelong Falcons premiership year and National Championships with Vic Country launched Ned into top 30 draft calculations. 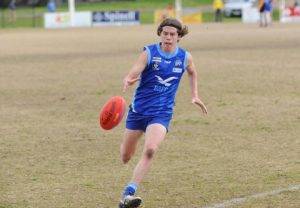 Ned was an integral part of the BHFC under 16 side that made the division 1 finals. Often dominating for Geelong College on the Saturday before doing the same in games for Barwon Heads on the Sunday.

Selected with Adelaide’s first overall pick in the 2018 draft at pick 16, Ned put in a sensational first season in the SANFL and was close to selection on many occasions for Adelaide.

From everyone at the club we wish Ned all the best on not just Saturday night but the rest of what we are sure will be a long career at the top level.