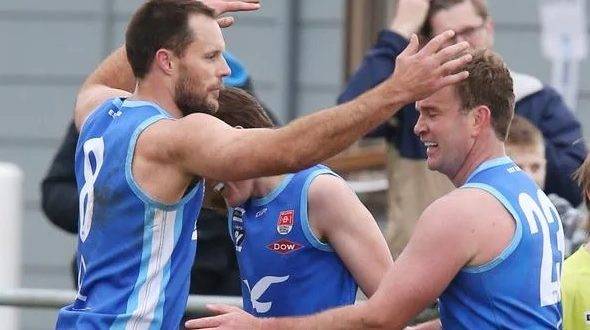 Barwon Heads produced their best performance for 2021 with a emphatic 100 point victory over Anglesea who sat second on the ladder behind the undefeated Torquay going into the Round 13 game. Barwon Heads made 6 changes to the side that produced a great come from behind victory in Round 12 against Drysdale. Into the side came playing coach Mitch Herbison for only his third game, Matt “Dogga” Dyer from a long injury lay off and Cam “Wolf” O’Leary for his first game since Round 6. Matty Beckwith and 2019 premiership players Michael Philp and Xavier Everett were promoted from the reserves. Out of the side went Damien Horbury, Sam Evans and Otto Opperman (all injured), Will Jacobs (ill), Jake Barlow (unavailable) and Sam Witherden (VFL).

Barwon Heads started the game with a ferocious attack on the ball and were obviously very keen to win its first home game since Round 1. A five goal first quarter was followed by a nine goal second quarter to establish a 62 point lead at half time. Anglesea produced their best quarter in the third when they kicked 3 goals to the Heads 2 but Barwon Heads again dominated the final quarter by again kicking 9 goals to win by triple figures and receive a great percentage boost and climb to second on the ladder.

Barwon Heads continued their unbeaten season by defeating Anglesea by 58 points to maintain their position atop the reserves ladder.